Over the summer of 2014, the Manchester Essex Regional School Committee and Leadership Team met to discuss its strategy to address what some might deem a “perfect storm” of circumstances. On one front, our school population has increased by 24% or 281 students over the past seven years. At the same time, our member towns have asked for and received a plan from the district that accounts for and begins to fund a looming debt related to retiree benefits. Often referred to as OPEB or unfunded liabilities, the district has embarked on a long-term savings plan that will fund these liabilities, but will require steadily increasing payments out of already precious resources. Add to this that the district no longer has the reserve funding that has offset town assessments in the past. Our communities face a difficult, but not onerous, decision in terms of school funding.

Where are we now?


·  Where are we in the budget process?

Measures taken in 2014 to close the gap

Low per pupil expenditure—how do we compare? 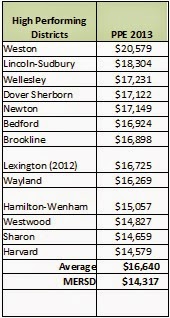 
Posted by Pamela Beaudoin at 2:27 PM