As outlined in the post MERSD Budget Challenges, the district is facing three issues that will require difficult choices to be made as we develop our FY-15 budget, namely declining school choice revenue, a dependency on reserves, and long-term liabilities/OPEB (Other Post-Employment Benefits) funding.

For the past three years, the district has been successful balancing the impact of increased resident enrollment while maintaining low assessments for the towns by implementing the following strategies:


Declining School Choice Revenue
MERSD is experiencing an enrollment shift (see MERSD Budget - Enrollment the Driving Force) that that has a direct impact on revenue. Our student population growth—24% or 281 students in six years—has prevented the district from offering new school choice seats since FY-11, which has led to a decline in overall school choice enrollment and incoming revenue. The school choice program is a state program that allows parents to send their children to schools in communities other than the city or town in which they reside. Tuition is paid by the sending district to the receiving district. MERSD is a choice district, but has not accepted new choice students in recent years because of our increasing resident enrollment. At its height, MERSD enrolled 150 students, providing $875,000 in revenue to the district. As resident enrollment has increased and the district chose not to accept choice students, the number or students enrolled in the school choice program has declined to 80 students in FY14 ($430,000 in revenue). Because we have been unable to offer new seats to balance graduating choice students, school choice enrollment is projected to drop to 60 students for FY15, bringing revenue to an estimated low of $350,000.

Historically, School Choice revenue has assisted in keeping the assessed cost to taxpayers lower than the growth of resident student enrollment would require. Because school choice dollars have allowed MERSD to maintain strong reserves and offset one-time costs, we have been able to sustain high quality programming through difficult economic times. 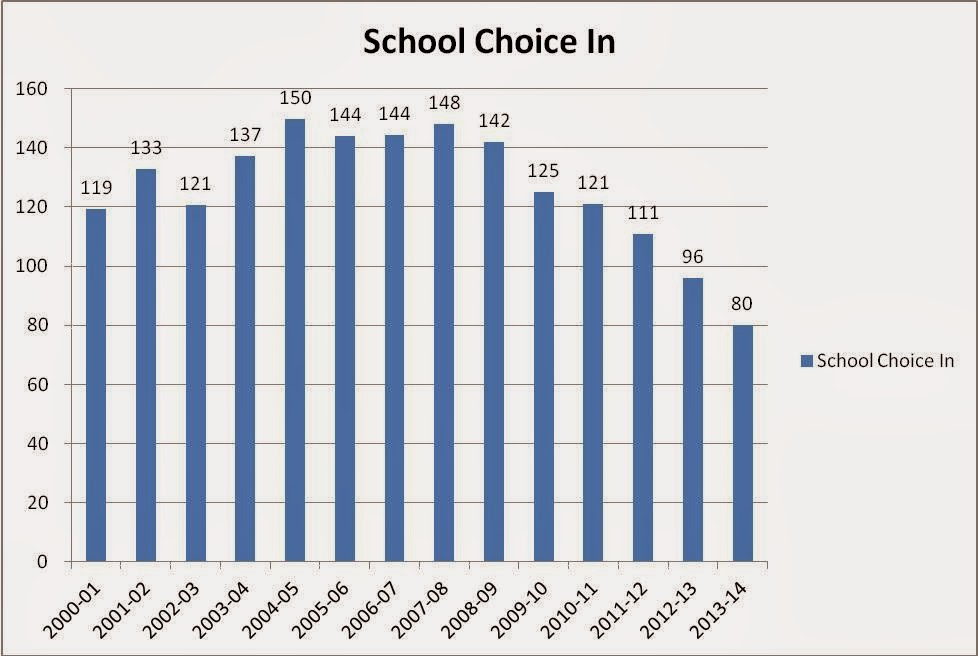 MERSD’s priority is to serve resident students, and, as such, the trend away from School Choice enrollment has been intentional; however, this has resulted in a decline in revenue.  Therefore, the rate at which this occurs is of critical importance to the annual budget.  As a result, in an attempt to close the budget gap for Fiscal Year 2015, the MERSD School Committee is considering, for the first time in three years, replacing some of graduating choice students with new choice students in the fall of 2014. The goal would be to strategically hold our school choice revenue level from FY14 in a manner that minimizes the impact on class size and resources and allows for a more gradual reduction to School Choice enrollment.

Although we continue to seek internal efficiencies in order to maintain class size and program offerings, we have reached a point where the overarching budgetary issues must be addressed. We encourage you to visit the MERSD Budget page  to review our recent articles and presentations and to learn more about the goals and the challenges we are facing. We also hope that you will consider increasing your involvement with the schools. We welcome your participation and input as we work to make MERSD a world-class district.

A great way to join the conversation and learn about what's going on is to attend a School Committee meeting. Here are the dates of our upcoming meetings.

Posted by Pamela Beaudoin at 6:53 AM